from 189 $/day
Test winner
Convincing service
More than 34.000 happy customers
4,5 / 5
Cancellation free of charge
Up to 24 hours before pick-up Up to 24h before renting
We are happy to assist you with your booking!
booking@driveboo.com
Car Rental
Europe
Greece
Central Macedonia
Thessaloniki

A rental car in Thessaloniki can be conveniently booked in advance via the Internet and a price comparison can be made between the various providers, so that it is easy to rent a car online. Then the Greece holiday in a rented car can start with a city tour of Thessaloniki. With over 325,000 inhabitants, Thessaloniki is the second largest city in Greece after Athens. If you add the metropolitan area around the city centre, you get a figure of almost one million inhabitants. So there is lots to explore by rental car. Look forward to your perfect trip around Thessaloniki by rental car.

The city of Thessaloniki is of equal importance both politically and culturally as the most important centre in northern Greece. In terms of transport technology, the city is networked both nationally and internationally in terms of road and rail transport, i. e. it makes perfect sense to rent a car. In addition, there is a large ferry port with many connections within the Aegean as well as to selected other cities around the Mediterranean.

Start a road trip through Thessaloniki in summer

Visit Thessaloniki in summer and make it an unforgettable experience. Get your own rental car and visit the most beautiful beaches and other highlights. During summer, temperatures can get quite high in Thessaloniki. Therefore, make sure you get yourself a rental car with airconditioning or jet along the coast in a convertible. This will be your summer in Thessaloniki. 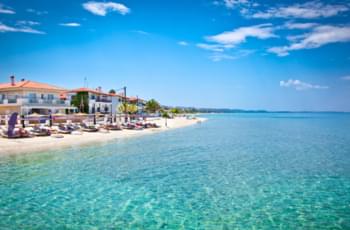 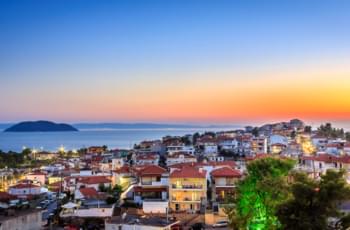 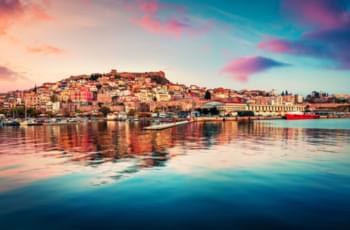 Thessaloniki has many facets

But it is not only the historical Thessaloniki that makes a longer stay worthwhile, but also the city's current character. In this respect, it is also easy to explore the different parts of the city in a rental car. A convertible should be the first choice when it comes to rental cars. Because good weather is practically guaranteed and the impressions gained from the city of Thessaloniki become much more immediate in terms of the clear view, the sounds of the big city life and its smells. From time to time, however, the rental car should also be parked, for example, to take a stroll along the extensive waterfront promenade. If it is time to stop for lunch or dinner, it is advisable to drive the rental car towards the Ladadika district. This is the former quarter of oil traders. There are many buildings from the penultimate century which have been restored in the last decades in great and loving detail work. The result is a picturesque district in which a multitude of restaurants and bars are located. That's why it is possible to eat cheap food and dine in an upscale form, depending on what your own wallet allows.

Another advantage of renting a rental car is that your own exploration tours are not limited to the immediate urban area. In order to really get to know Greece, it is essential to rent a car in order to look around in the more rural areas. Nothing is better suited for this purpose than the peninsula directly adjacent to the city.

The more remote bays and beaches can also be reached with the rental car. A holiday in Greece requires at least one day on the beach with extensive bathing in the Mediterranean Sea. If you travel by rental car, you are not bound to the times of the bus lines when it comes to returning to your accommodation. The Chalkidiki peninsula also has a lot to offer for people interested in culture and history. The holy Mount Athos should be mentioned first and foremost among all the sights. This is the easternmost of the three most prominent peaks of the peninsula and is a monk's republic that has been autonomously ruled and administered for centuries. Altogether there are 20 monasteries in which about 2000 monks live. The rest of the landscape is practically untouched, which contributes to a special form of calm atmosphere. However, a visit to Athos is reserved exclusively for male visitors over the age of 18 who can demonstrate a spiritual, academic or cultural interest. But there is also a lot to discover away from Athos by renting a car in Chalkidiki. Something like the historical Stageira, which is considered the birthplace of the famous philosopher Aristotle. The remains of the city's ancient fortifications can be traced back to this period. Also worth a visit are the silica mosaics of Olynthos. The same applies to prehistoric finds in the stalactite cave of Petralona. The beaches around Sithonia and Kassandra are ideal for sun-hungry holidaymakers. 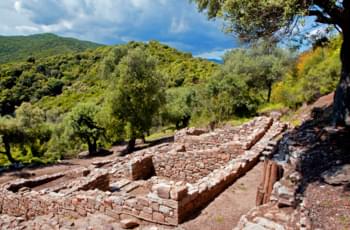 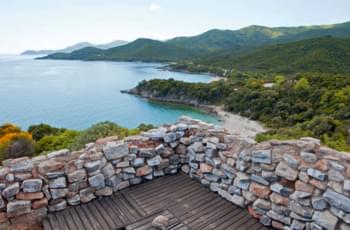 The Rotunda of Galerius in Thessaloniki, Greece

Car Rental in the vicinity of Thessaloniki