from 34 $/day
Test winner
Convincing service
More than 34.000 happy customers
4,5 / 5
Cancellation free of charge
Up to 24 hours before pick-up Up to 24h before renting
We are happy to assist you with your booking!
booking@driveboo.com
Car Rental
Europe
Spain
Lavacolla
Santiago de Compostela Airport

At Santiago de Compostela Airport (SCQ) you can pick up your rental car easily and comfortably. It is best to check the offers and availability of your desired rental car on Driveboo.com well in advance. This way you can compare at a glance the offers of all car rental companies located at the airport. Book online today because airport car rental is very popular with travelers and in high season, certain types of vehicles may already be fully booked.

Summer and spring are the perfect time to travel to Santiago de Compostela for a vacation. With a rental car, you can perfectly explore the region around Santiago de Compostela on your own. While many other tourists are sitting in cramped buses and canvassing sights in large groups, you can drive your rental car into nature, explore the beaches in northern Spain or even make a detour to Portugal. In the spring and summer months, a round trip along the northern coast of Spain is worthwhile. This way, you can always cool off and continue your drive in the high temperatures. If you are in Santiago in June, you should not miss the famous Fiestas del Apostól. It is the most important festival in Santiago de Compostela and goes from mid-June to the end of the month.

Where is the nearest gas station at SCQ Airport?

There is a Shell gas station at the second traffic circle just outside the airport, open from 7am - 2pm. It accepts cash and card payments. So you can rest assured before returning your rental car to refill the tank. Most of the rental cars you can book through Driveboo.com include the full/full fuel policy. This means that you can pick up the car with a full tank and drive off immediately. However, you have to return the car with a full tank. This is a very fair arrangement for your use, as you thus only pay for the kilometers you have actually driven.

Santiago de Compostela Airport currently has one terminal and is very well laid out. The old terminal at Santiago de Compostela Airport opened in 1969 and had many expansions during its operation. The terminal closed in October 2011, where operations were transferred to the new terminal. The new terminal opened for passenger operations in October 2011. It is located next to the old terminal and has a size of 74,000 square meters. The new terminal has 22 check-in counters, three security checkpoints and 13 gates for boarding aircraft. There are five gates for direct access to the aircraft and four baggage belts. The baggage hall is divided into two zones, one for EU flights and one for non-EU flights. The airport can handle up to 4 million passengers per year.

The airport is only 13 km away from the city of Santiago de Compostela and is connected by the Autovía A-54. In addition, you have good access to other places in the area. The nearby Autopista AP-9 connects the airport directly with the towns of A Coruna (66 km), Ferrol (88 km), Pontevedra (75 km), Vigo (100 km) and the Portuguese border. Ourense (116 km) is accessible by the Autopista AP-53, which connects with the Autopista AP-9. There are several large car rental companies at the airport. The airport has more than 5,000 short- and long-term covered parking spaces in the new terminal building. In addition, there are several private, low-cost parking lots around the airport.

Other means of transport in Santiago de Compostela

A city bus service, operated by the Empresa Freire company every 30 minutes, connects the airport with the center of Santiago de Compostela and bus and train stops in the city.

From the bus station in Santiago de Compostela, private bus operators run direct services to most cities in Galicia, including A Coruna, Ferrol, Lugo, Ourense, Pontevedra and Vigo. There are direct connections to the rest of Spain and long-distance buses to international destinations.

In addition, three regional bus lines link the airport directly to A Coruna, to Lugo, including several stops on the French Way of the Camino de Santiago and to the coastal area of A Marina (site of the "As Catedrais" beach) in the province of Lugo.

There is no train stop at the airport. However, the train station in Santiago de Compostela is connected to the airport by the city bus service every 30 minutes. There are combined train and bus tickets to and from the airport. The Santiago de Compostela train station has connections with the Alvia and AVE high-speed trains to most cities in Galicia, including A Coruna, Ferrol, Ourense, Pontevedra, Vilagarcía and Vigo; and on to Madrid Chamartín Station and the rest of Spain.

Santiago de Compostela - what you should visit

The city of Santiago de Compostela is probably one of the most interesting and socially relevant cities in Europe. For many years, the city has been the destination of thousands of pilgrims who set out every day on the journey along the Way of St. James. But not only pilgrims find their way to Santiago de Compostela. The city is also popular with tourists because of its unique charm. It is one of the largest university cities in Spain with over 40,000 students. Enjoy a stay in Santiago de Compostela and learn more about the connections between Spanish traditions and the modern present that dominate the city today.

What can you visit in Santiago de Compostela with a rental car? 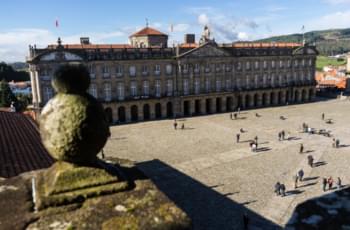 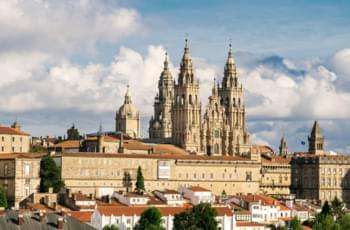