In springtime explore sights and cities in Fuerteventura

In Puerto del Rosario you can discover sights like the church Iglésia Nuestra Senora del Rosario. Inside the small church in the city center you can see a Madonna of the Rosary known on the island. There are a few dozen sculptures scattered in the city center, you can find them in Calle León y Castillo, in the pedestrian street Calle Primero del Mayo and along the waterfront. Along the waterfront is the Fuente de la Explanada fountain, with scenes from the lives of the residents, and the Horno de Cal, a historic lime kiln. The Casa Museo Miguel de Unamuno, the house and museum of the Basque writer who lived here in exile. But if you want to explore further cities and possibly their sights on Fuerteventura, then definitely book a rental car for your trip, because you will need it not only when exploring the sights, but also during a city trip.

Where is the best place to find a rental car in Puerto del Rosario?

To get to the really beautiful places and beaches of the island, it is advisable to take a rental car. The roads on Fuerteventura were completely renewed a few years ago and are therefore very well passable. However, some highlights of the island can only be reached via sometimes bumpy and adventurous roads. The car rental companies on the island forbid it, however (probably from experience) to visit these places with normal cars. If you want to reach everything on the island, you have to rent an SUV

Whoever breaks down on the road is not allowed to be towed by another car. One must always call a towing service, whose service in Spain is usually included in the car insurance. 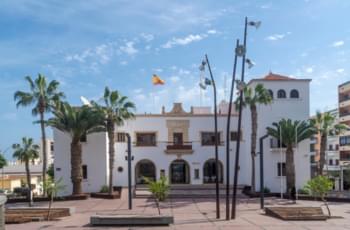 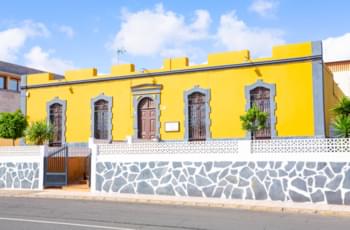 Dipped headlights during the day are not mandatory for cars. However, it is widely recommended by Spanish road authorities, especially on rural roads, on overcast days and during the darker months of the year. 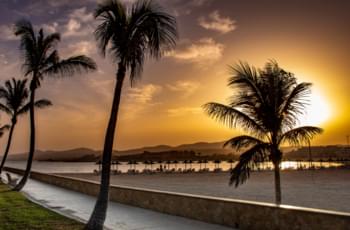 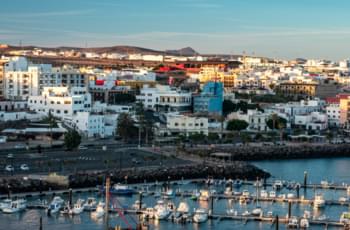 The minimum age for drivers in Spain is 18. Every driver is required to carry a driver's license, vehicle documents, insurance documents and an ID or Passport to identify yourself. Vacationers from EU countries can drive in Spain with their domestic driver's licenses without any problems and do not need an extra international driver's license.

The maximum speed in each case is always indicated by signs, as this can vary depending on the condition of the road.

When is the best time of year to travel to Puerto del Rosario?

On an island like Fuerteventura, there is basically no best season. Each season here has its own charm and advantages or disadvantages. In summer, for example, you can relax wonderfully by the sea and spend a week at a stretch just lying on the beach, but that's the high season and that means it's incredibly busy. In winter, on the other hand, you probably won't be able to swim much in the sea, but the temperatures are perfect for exploring the whole island and your cities. We've put together a climate table for you so you can use that to expand your pros and cons list. 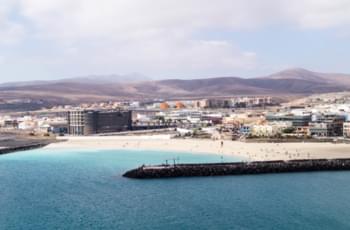 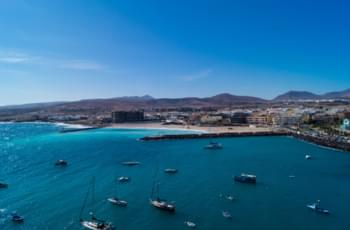 Excursions by rental car in Fuerteventura

Fuerteventura is the second largest of the Canary Islands in the Atlantic Ocean, northwest off Africa's coast. Declared a Biosphere Reserve by UNESCO in 2009, Fuerteventura is blessed with the most beautiful beaches in the archipelago, a ruggedly beautiful landscape and over 3.000 hours of sunshine. It has long been a top destination for visitors interested in the island's cultural heritage and admiring the large number of centuries-old mansions and beautiful churches. Popular with tourists are the wide sandy beaches along the east coast. The constant winds make the beaches of the island interesting for water sports enthusiasts, wave riders on the west coast, wind surfers in the north near Corralejo or on the east coast (especially on the long stretch of beach between the Costa Calma and Jandía). Here, especially in recent years, kitesurfing has also established itself. The west of the island consists to a large extent of steep coast with life-threatening offshore currents. In Fuerteventura's mountainous landscape, but also on the slopes sloping down to the beaches of the east coast, one can encounter the cute atlas squirrels, which move nimbly through the rocks and are accustomed to humans from case to case. The first animals were introduced from North Africa in 1965, they multiplied rapidly and today sometimes cause serious damage to vegetation.

Car Rental in the vicinity of Puerto del Rosario