from 40 $/day
Compact
Compact
e.g. B FORD FOCUS Or similar

from 56 $/day
Convertible
e.g. U FORD MUSTANG CONVERTIBLE Or similar

Planes at the airport

Once you've decided to travel to Arizona, check out the comprehensive car rental deals at Phoenix Sky Harbor International Airport. With us you rent a car very cheaply and are able to add all the important details to your booking. At Phoenix Airport, the Sky Harbor International Airport PHX, all you have to do is go to your car rental company and pick up the car at the pick-up point. Look forward to an unforgettable time in Phoenix, Arizona. With a rental car you can explore the city and surrounding area flexibly and independently.

Spring in Phoenix: Leave the umbrella at home

Spring in Phoenix is already pleasantly mild, but not yet too hot to be active. The spring temperatures in Phoenix are ideal for extended hikes. Leave your umbrella at home, because you will hardly need it in spring. Look forward to spectacular views over the valley, for example when you climb up to Camelback Mountain. Desert plants such as agaves, mesquites and yuccas can be found in the Botanical Garden, where you can take a spring-like day trip. You don't feel like hiking or cycling? No problem. Then simply go shopping or visit the most popular sights in Phoenix. As you can see, spring in Phoenix has something for everyone.

Collecting the rental car at the airport

The airport with the IATA code PHX is located only five kilometers southeast of downtown Phoenix. More than 43 million passengers are handled each year at the international airport Sky Harbor, making it one of the world's largest airfields. They will presumably arrive at passport control after landing in Terminal 4, Terminal 3 is reserved for the major US airlines and Terminal 2 is used by smaller airlines for domestic flights.

As soon as the entry formalities have been completed and you have taken your luggage off the treadmill, you naturally want to pick up your rental car at the car rental company. At the Sky Harbor International Airport PHX there is also no terminal with a car rental service. Every car rental company has its office and pick-up station outside the arrivals hall. It is possible to rent a car spontaneously at the airport, but with some effort and additional costs.

Which car rental companies are there at Phoenix Airport?

Among other things, you will find these car rentals at Phoenix Airport:

What to consider when renting a car in Phoenix

Check the rental car in advance

Cheap rental offers should not prevent you from visually inspecting the car you are renting. Damages have to be tracked down before the takeover, reported to the supplier on site and registered in a list of defects. Be sure to have a copy of your car delivered to you so that you are safe from any car rental problems.

Depending on the type of fuel option you chose, you will receive a fully refuelled car and have to return it with a full tank as well. For this purpose, a petrol station should be present at the airport near the car pick-up station. Unfortunately, there is no petrol station at the car rental company, but there are some petrol stations in the vicinity of the airport.

Traffic Rules in the US

Before you take part in road traffic, you will find some important traffic rules here. Please note that individual traffic regulations in the USA may differ from state to state.

Discover the city of Phoenix by rental car

Renting a car at an affordable price allows you to conveniently access the highlights of the Arizona metropolis, which are located far away from each other. In this context, the Arizona State Capitol with its copper dome or the Phoenix Museum of History, the oldest museum in the state, are worth seeing. Equally interesting are the Arizona Science Center, the Phoenix Art Museum and the Heard Museum. All destinations are located in the city centre, have free parking spaces and can be reached quickly by rental car due to well-developed roads. The range of leisure activities in the megacity near the airport is equally extensive, with 27 public swimming pools, for example. But the absolute attraction is Big Surf, a huge water and adventure park in the middle of the desert. Relax with the whole family on fine sandy beaches and enjoy swimming pleasure with water slides and artificial waves of one meter height and more.

Explore Arizona with your Rental Car

Renting the right vehicle at a reasonable price and still offering sensationally cheap gasoline will put you in a position to explore the entire state. For example, Phoenix Airport could be the starting point for a tour of the Grand Canyon. The Grand Canyon National Park is probably the most attractive and well known tourist attraction in Arizona. To do this, you drive 670 kilometres northwards in a rental car from Phoenix and, while adhering to all speed limits, you will need nine hours, which is worthwhile in every respect. On the one hand, the canyon is a geological miracle and on the other hand, the multi-faceted desert landscape merges halfway into green forested mountains. You can also take the bike to neighboring states such as New Mexico and Albuquerque. 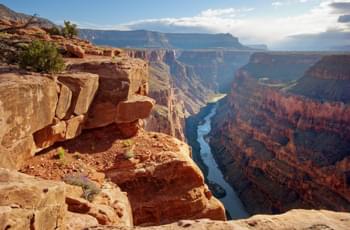 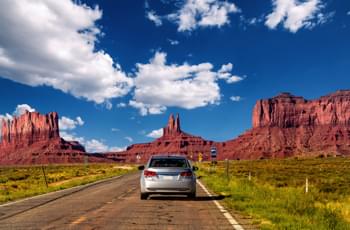 Another reason why you should definitely rent a car or motorcycle is the comparatively wide range of very different national parks. If you continue west from the Grand Canyon, the rental car will take you to large lakes, a true paradise for anglers and water sports enthusiasts.

On your way to Lake Mead National Park you could visit Hoover Dam. The Saguaro National Park in the west of Arizona has a completely different atmosphere. Here, huge cacti and a wide variety of desert plants dominate the scenario. An amusement park in Tucson is a great way to explore the Wild West. From there you could rent a car and drive to the old western city of Tombstone. Worth seeing are also the Kofa National Wildlife Refuge and Joshua Tree National Park, both located at Interstate 10 west of Phoenix Sky Harbor International Airport.

Car Rental in the surroundings of Phoenix Airport