Picking up your rental car at Honolulu International HNL Airport is not difficult. Assuming you have previously compared the offers of each local car rental company with Driveboo and then simply and conveniently decided to rent a car from home or on the way with an online booking. The airport has a high volume of passengers and therefore it is advisable to book early in order to get a rental car that meets your requirements.

Winter in Honolulu awaits you with many exciting festivals and events. Be there when, as every year, the lights are lit on the Christmas tree and join in the feverish excitement of the world-famous winter surf competitions. Hawaii is the perfect place to kick off the winter vacations. Winter sports enthusiasts will also get their money's worth in and around Honolulu. Take a rental car and go snowboarding on the summit of Mauna Kea. Make your winter vacation in Honolulu an unforgettable highlight.

Do I have to refuel the car when returning it?

Refueling the rental car in Honolulu

petrol stations near the Honolulu airport

Car rental and other transportation at Honolulu HNL Airport

You don't want to pick up your rental car at the airport, but only in the city centre? Another possibility to get to Honolulu is the SpeediShuttle, a low-cost group taxi for up to 7 passengers. Stops are conveniently located on the ground floor next to baggage claim C, as well as at the International Terminal, in front of the commuter terminal and on the central lane outside the baggage claim area. SpeediShuttle staff with red Aloha shirts can be found in every hall of the baggage claim area and at the respective stops to arrange your transport. The buses stop outside the 2nd floor and run every 30 minutes. Taxis are also available at the airport. These are also called Taxicab and are operated by the company AMPCO Express. You will find taxis along the entire baggage claim area outside the building in the central lane of the roadway. You can recognize the staff by the yellow shirts with the inscription "Taxi Dispatcher" on the back, which you assign to your taxi. The fare from Honolulu Airport to Waikiki is approximately $45 plus a 50 cent surcharge for each piece of luggage. The travel time is always charged by taximeter.

The airport offers a variety of options for passengers waiting for their flights. Shopping facilities and restaurants can be found throughout the airport. The culinary offerings range from cafés, fast food to Hawaiian specialities. In addition, visitors can enjoy the free Hawaiian show in the lobby, stroll through the cultural gardens or view the various works of art and exhibits. The cultural gardens show the influence of the Hawaiian, Chinese and Japanese heritage on the "island life" in the state of Hawaii. Paths, bridges and stepping stones connect the three gardens. Small streams flow beneath these ponds and lakes to symbolize the blending of cultures in Hawaii. Sculptures by various artists can also be found in the gardens.

O' ahu is with 1574 km2 the third largest island of the archipelago. In the east of the island is the mountain range Koolau Range, in the west it is the Waianae Range. In the middle is a relatively flat plateau. The most sunny south coast of the island consists of coral limestone and is white. It is home to the most populous part of the archipelago, the City and County of Honolulu with its most famous district Waikiki. The east coast has a relatively narrow, flat edge, it is rich in rain and lush vegetation. The north side is windy and ideal for surfers. The western part of the island is barely accessible for tourists. The island is crossed by the interstate H1 almost completely along the south coast, the H2 leads from Wahiawa in the center to Honolulu, the H3 from Kailua in the east to Honolulu.

Discover places of interest in Honolulu by rental car 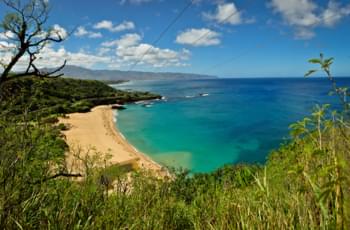 Car Rental in the surroundings of Honolulu International Airport