Current offers at the Frankfurt Airport

from 20 $/day
Compact
Compact
e.g. Ford Focus or the like

from 21 $/day
Further vehicle classes
Intermediate
e.g. Opel Crossland X or the like

from 20 $/day
Station Wagon / Minivan
e.g. Opel Combo Life or the like

from 22 $/day
Luxury Car
e.g. VEHICLE DETERMINED UPON PICK-UP (MINI THROUGH MINI VAN) or the like

Pick up your rental car at Frankfurt Airport (FRA)

Thanks to its excellent transport connections, Frankfurt Airport is a perfect starting point for excursions into the surrounding area. Rent a car of your choice at a pickup point of the car rental company and drive off to explore the city of Frankfurt am Main and the surrounding area with your rental car. Worth seeing are the goldsmith's town Hanau, only 20 kilometres away, or the university town of Aschaffenburg, which captivates with its location on the Main. Take a trip to the legendary Spessart and visit the town of Lohr or the Mespelbrunn moated castle, which seems to be enchanted by its loneliness in the forest. The Taunus is located northwest of the Main metropolis, the low mountain range has a lot to offer to the visitor and is easily accessible by rental car. The Saalburg is one of the best preserved Roman castles. In the open-air museum Hessenpark you will gain an impression of 400 years of Hessian culture and development. Or drive your rental car through the lovely Kinzigtal valley to Gelnhausen, the town where the Middle Ages are alive. Ronneburg, one of the best-preserved Staufer castles, and the charming town of Büdingen are also worth a visit. West of Frankfurt am Main lies the Hessian state capital Wiesbaden, on the opposite side of the Rhine is the cheerful city of Mainz. Stroll along the Rhine with your rental car and discover the charming wine villages like Rüdesheim or Eltville. Your rental car gives you the opportunity to make wonderful trips to the region - directly from Frankfurt Airport! 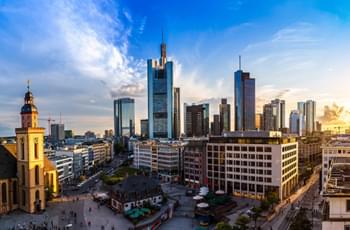 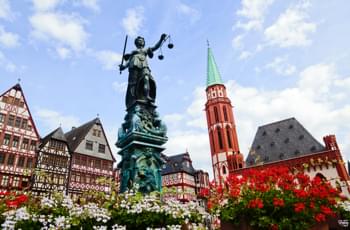 Discover the old town of Frankfurt by rental car

Frankfurt Airport and its development

The airport of the Main metropolis has a long history. As early as the 1930s, the predecessor was abandoned near Frankfurt's Rebstock site, as it was not possible to expand its construction. At the new location in Frankfurt's Stadtwald forest, construction activity began briskly, the airport was continuously expanded and grew to its current size in decades. Between 1970 and 1985, Terminal Mitte and the West runway were built. This was followed by the construction of Terminal 2 and the long-distance railway station, followed by the expansion of Terminal 1 and construction of the northwest runway. Today, the runway system at Frankfurt Airport consists of four runways. Several terminals are available for passengers, the two large terminals are Terminals 1 and 2, which have a total of five halls. There is also the smaller terminal for Lufthansa's first-class passengers and special frequent flyers. The SkyLine passenger transport system connects Terminal 1 and Terminal 2 with an elevated railway line, and there is a wide range of car rental options available at the airport so that you can have a rental car at your disposal when you arrive.

Frankfurt Airport and its operator Fraport

Fraport AG is the listed operating company of Frankfurt Airport. The company's registered office is located in the metropolis on the River Main, its corporate headquarters are located directly at the airport, and Fraport is a state-owned enterprise at Terminal 3, as the majority of the company is state-owned. The history of Fraport AG goes back to 1947, when Fraport was founded under the name of VAG (Verkehrsaktiengesellschaft Rhein-Main). In the 1950s, VAG was renamed FAG (Frankfurt/Main Airport) and after its IPO in 2001, Fraport was officially renamed Fraport AG Frankfurt Airport Services Worldwide. Prior to the initial public offering, Fraport was mainly owned by the State of Hesse, the City of Frankfurt and the Federal Republic of Germany. After the IPO, Fraport's ownership structure is spread over almost 32% in the state of Hesse, 20% in the city of Frankfurt, more than 18% in the Federal Republic of Germany and about 30% in free float. Fraport has investments in other domestic and foreign airports.

The airport's extensive grounds are located in the south of the Main metropolis, about 12 kilometres from the city centre. The majority of the area is part of Frankfurt's city forest, but the neighbouring communities of Rüsselsheim, Mörfelden-Walldorf and Kelsterbach also have a share in the airport's area. Frankfurt Airport is an independent district with about 200 inhabitants. The airport has excellent traffic connections and is conveniently located for anyone who travels by car around the airport. Since 1953, the A3 motorway has been running between the city and the Frankfurt Airport district in an east-west direction since 1953. It crosses the A5 motorway at the Frankfurt interchange and has a north-south direction. These two important motorways form one of the busiest road junctions in Europe at the Frankfurt interchange. The airport site is connected to the two motorways via several junctions. Another access road to the airport is the federal highway B 43, which runs parallel to the A 3 motorway and has further access points. If you pick up a rental car at an airport pick-up station, you can drive directly to your destination via motorway or main road.

Information about airlines and destinations on Frankfurt Airport

A total of 117 airlines fly to Frankfurt Airport. Lufthansa, Condor, Air Berlin and Scandinavian Airlines are among the airlines with the largest share of flight volumes. On routes operated by these airlines, Lufthansa and Condor account for 165 and 115 routes, respectively. Air Berlin and Scandinavian Airlines operate 57 and 50 routes. Other airlines such as Air Lingus, Swiss international Airlines or Air France divide up 717 routes. Cologne-based Deutsche Lufthansa AG is Germany's largest airline and operates a base at Frankfurt Airport. The airlines at Frankfurt Airport serve a total of 614 destinations in 153 countries around the world. Even though Frankfurt Airport is not known as a base for low-cost airlines, a number of airlines do offer flights that are very reasonably priced. For travellers arriving in Frankfurt there is a car rental service, where they can rent a car at low prices from various providers.

The online comparison offers the possibility to check the different offers in terms of car rental, so you can find information about the car rental company, where you can rent a car at a reasonable price for a balanced price-performance ratio. This check is relatively simple, it is important to highlight the criteria that are important for you if you want to rent a car at a reasonable price. Do you prefer to rent a car with manual transmission or do you prefer to drive a car with automatic transmission? The check also provides information about the equipment. The more information you enter into the search form when checking in, the more likely it is that you will be able to find exactly the car you are looking for that matches your expectations of a rental car and is also reasonably priced. This comparison can be easily done online in advance. You can also complete your booking online after the check. The best thing to do is to check and book your rental car at the same time as your flight booking, which you can also do conveniently online. When booking a flight, you should also carry out an online check to find offers that are good and cheap. Pay attention to the transport class, among other things. It makes a difference whether you book Economy or Business. Economy is the tourist class, while business is the second highest level. Economy is cheap, but business offers high comfort. However, there are again significant differences between economy and business in the airlines' offerings. Carry out your check online and decide whether Economy or Business is convenient for you.

Airport Frankfurt - Information about your luggage

Frankfurt Airport is one of the largest international airports, a city in the city. Correspondingly, the stretches and the distances you have to cover are the same. But regardless of which terminal you arrive at, the baggage claim area is always within easy reach. There are also luggage trolleys so you don't have to carry your luggage to the car rental counter or later to the car. You can rent the luggage trolleys for a small fee and return them to one of the depots at a later date. If you only have a stopover in Frankfurt, but still want to rent a car from the car hire company to explore the area, you can rent a place at the luggage depot. You can choose between short-term or long-term storage. The rents depend on the size of the luggage and the length of stay.

Information about petrol stations for your rental car

When you book your car with the car rental company, you decide online about the fueling regulations for your rental car. Would you like to pick up the car you have rented at the pick-up station of the car rental company and return it to the pick-up station with a full tank of fuel? For this you have to choose the tank regulation full/full. However, you can also opt for a different fuel system when renting a rental car. In any case, it is advisable to find out where you can refuel the car you are renting. Either directly after the pick up at the car rental or before the return at the station of the car rental. At Frankfurt Airport there is a petrol station directly on the airport grounds where you can refuel your rental car. But you can also refuel your car on the B43 federal highway, the feeder road. And on the only few kilometres long way towards the city centre you will find several petrol stations, which offer you the possibility to refuel your rental car at a slightly lower price than directly at the airport.

By rental car through the region around Frankfurt Airport

The Main metropolis Frankfurt dominates the region. Frankfurt is not only the largest city in the Rhine-Main region, but also the most interesting. Frankfurt am Main is the cultural and economic centre with excellent transport connections, excellent infrastructure, a diverse and vibrant cultural scene as well as sights and events of international standing. If you arrive without your own car, you should rent a car. Frankfurt has a very well developed public transport system with buses and trains, but the rental car gives you flexibility and independence. It makes no difference whether you visit the metropolis for business or private reasons. City travellers, globetrotters and businessmen will find a packed programme in the cosmopolitan city on the Main. Here you can rent a car cheaply from a car rental company to explore Frankfurt in all corners of the city. Even the less well-known parts of the city are well worth a visit. Frankfurt has a long and eventful history, its location on the Main River has played a central role in trade for many centuries and was therefore extremely favourable to the development of the city. The Main is the lifeline of the city. Without the River Main, urban development in this form would never have been possible. But this is how the small settlement on the river, which, as the name Frankfurt already says, was founded by the Franconians, turned into a metropolis with well over 700,000 inhabitants. The city of Frankfurt am Main is known worldwide. 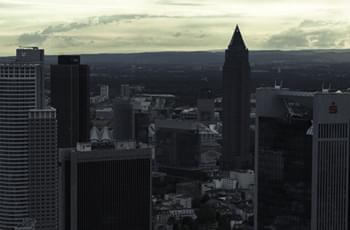 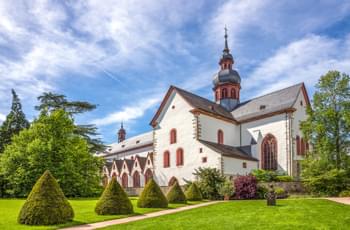 Drive with the rental car to Frankfurts attractions: the monastery Eberbach

Questions about the price

Car Rental in the surroundings of Frankfurt Airport