from 54 $/day
Test winner
Convincing service
More than 34.000 happy customers
4,5 / 5
Cancellation free of charge
Up to 24 hours before pick-up Up to 24h before renting
We are happy to assist you with your booking!
booking@driveboo.com
Car Rental
Africa
South Africa
Gauteng
Johannesburg
Johannesburg Airport

Rent a car at Johannesburg Airport

Be mobile in South Africa from Johannesburg Airport (JNB) with a rental car from Driveboo.com and discover the country independently. Compare the prices of several rental car companies easily at the price comparison at Driveboo and find the cheapest rental car for your trip in South Africa. Johannesburg Airport (JNB, official name: OR Tambo International Airport) is an international airport near Johannesburg in the Republic of South Africa. Africa's busiest airport is the hub of South African Airways, the largest airline in Africa, and numerous smaller airlines with non-stop flights to all continents. It also serves as an airport for the capital Pretoria. 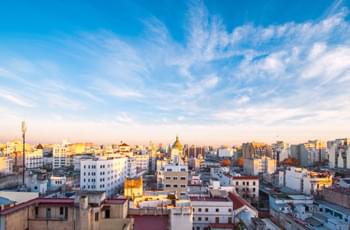 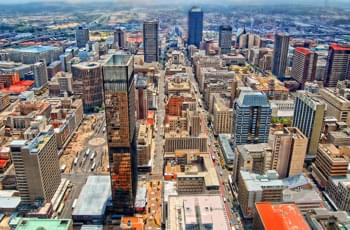 Aerial of the city of Johannesburg

Spending the summer in Johannesburg

Even though the temperatures in Johannesburg are rather low during our summers, you can do and experience a lot in South Africa. Take a rental car and start your unforgettable summer in Johannesburg. If the weather is bad during your summer holiday in Johannesburg, you can easily visit one of the museums with your rental car. The Apartheid Museum, for example, offers a comprehensive insight into the era when not everyone enjoyed equal rights. Immerse yourself in South Africa's dramatic history and learn more about how apartheid came about. To get to know all facets of Johannesburg and its surroundings, we recommend the following activities:

Car rental at Johannesburg Airport: What car rental companies are there?

The car rental companies' counters are located on level 0 in the multi-storey car park opposite the terminal for domestic flights. There is a free shuttle bus service between the various terminals and other facilities on the airport grounds. The following car hire companies are located at Johannesburg Airport:

Via the road network, the airport grounds can be reached primarily via the national road N12, which runs along the southern periphery of the airport in an east-west direction. At the Rietfontein junction, the regional highway R21 branches off to the north at the Rietfontein junction, which allows access to and exit from the motorway at the main entrance, and then continues to cross the N1 until Pretoria. Another regional road, the R24, leads from the west to the airport. It branches off the N12 at the Meadowbrook junction in Germiston. It provides a direct connection to the Central Business District of Johannesburg via the Albertina Sisulu Road in a westerly direction.

A railway station was built between the national and international terminals. It houses the Gautrain station, which connects the airport with Sandton, a large business district and an important tourist area. From Sandton there are other connections with the rest of the Gautrain system.

The section connecting the airport to Sandton in Johannesburg was completed in time for the 2010 World Cup. The trains have 90 journeys per day and carry an estimated 8,000 passengers daily.

Five city bus lines operated by Metrobus and Putco run twice a day to the airport. The buses run in the mornings and evenings when there are many passengers leaving and arriving. There are also private bus lines operating express buses to the Central Business District CBD of Johannesburg and other destinations. The companies are among others: Magic Bus, Luxliner, Airport Link and the Emperors Palace Airport Shuttle Service.

There is a taxi stand outside the arrivals hall, and for departing passengers, taxis can take you all the way to the departure hall on the upper level. Alternatively, you can also book a taxi to pick you up from the airport terminal. You will usually find the driver waiting for you with a name plate. The average price for an airport transfer from Johannesburg Airport to Sandton is about 450-600 SA Rand, depending on the type of taxi (luxury or standard limousine). Some of the reliable taxi service providers include Airport Link, Magicbus, Maxi Taxi and Roses Taxi.

The airport terminals at Johannesburg Airport

There are six terminals at the airport, but they can be divided into three main areas: international terminals; domestic terminals; and transit terminals. Terminals A1 and A2 are for international passengers, while the other two terminals handle domestic flights.

Due to the construction of the airport, departure and arrival terminals are regarded as separate terminals. The central terminal currently under construction is called Terminal A3 and will be used for international and domestic passengers.

The two terminals Terminal A and Terminal B were restructured. Several airlines now use Terminal B for all check-ins (upper floor, next to the arrivals lobby) for national and international flights. The airlines transferring the check-in to Terminal B are South African Airways, South African Express, Airlink Air Mauritius and Qantas.

Facilities in the airport building

Terminals A and B have 140 retail stores. The Duty Free shops are located in Terminal A after the security check and many of them carry products that are exclusively available at the airport.

There are more than 40 restaurants in the airport offering South Africa's culinary diversity.

There is a post office in the arrivals hall. At the airport there is a free Wi-Fi/Wi-Fi internet connection for either 50 MB or 30 minutes, whichever is the first, after that it is chargeable. There are power outlets for passengers in most areas of the airport, but you may need an adapter.

HOTELS IN OR NEAR THE AIRPORT

The Emperors Palace is also close to the airport. It is a casino resort and hotel in one.

Sightseeing in Johannesburg by rental car

With retail, family entertainment, animal watching and World Heritage Sites, Johannesburg has much to offer and a rental car from Johannesburg Airport will allow visitors to enjoy a relaxed journey to these places without having to rely on taxis or other means of transport at excessive prices. At Johannesburg Airport car hire companies there is also the possibility of renting larger vehicles so that groups can travel comfortably in one vehicle. 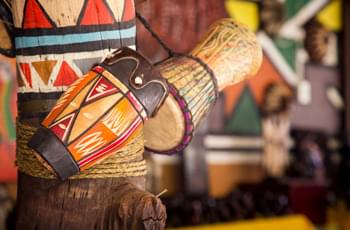 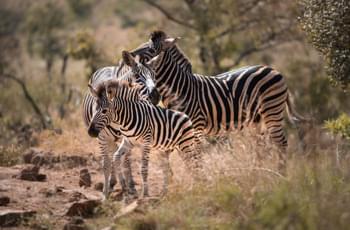 Zebras in the Pilansberg Reserve near Johannesburg

Car Rental in the surroundings of Johannesburg Airport