from 89 $/day
Test winner
Convincing service
More than 34.000 happy customers
4,5 / 5
Cancellation free of charge
Up to 24 hours before pick-up Up to 24h before renting
We are happy to assist you with your booking!
booking@driveboo.com
Car Rental
Europe
Spain
Tenerife
Santa Cruz de Tenerife

As the capital of Tenerife, Santa Cruz is the ideal starting point to explore the unique island with a rental car. With Driveboo you can compare the offers of the car rental companies in Santa Cruz and book online a rental car for Santa Cruz easily. Santa Cruz is the capital of the province of the same name on the island of Tenerife in the Spanish Canary Islands. Located in the northeast of Tenerife, the city has about 200.000 inhabitants. The city is significantly characterized by its port, which is one of the largest Spanish seaports of the Atlantic.

Rent a car in Santa Cruz during the summer?

If you want to spend your vacation not only on a beach, you can go to quite a few excursion destinations with your rental car in Tenerife. With a rental car you can do a lot in the evening as well as visit many different beaches where you can then relax until the temperatures cool down in the evening again to some extent. In the evening you can then explore the cities in the area and during the day try different beaches. Below is a list of must-visit beaches in Tenerife. 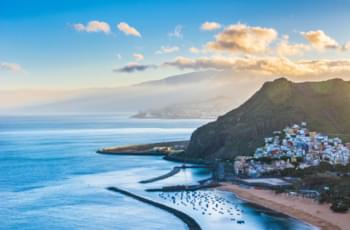 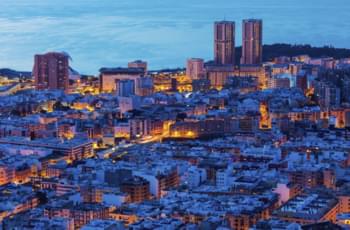 In Santa Cruz, Tenerife, you can pick up your rental car from the car rental company both in the city center and at the airport. Please note that there are two airports on Tenerife, Tenerife North and South.Tenerife North TFN is located about 10 kilometers west of Santa Cruz and today primarily serves traffic to the Spanish mainland and the other Canary Islands. Airport Tenerife South TFS is the newer and larger of the island's two airports. Scheduled buses connect the airport with the island metropolis of Santa Cruz de Tenerife in the north, about 50 km away, there is a direct fast connection via the southern freeway.

The road traffic on Tenerife and Santa Cruz

To get to the really beautiful places and beaches of the island, it is advisable to take a rental car. The road network is now in good to very good condition. All main connecting roads have been upgraded and renewed in the last 10 years. In addition, the highways and the coastal roads that connect the north with the south are free. The roads in the mountains are sometimes very narrow and winding. Here, however, you also do not have the big tour buses in front of you on the roads. All roads on the Teide, however, are very well developed. Thus, the island can be explored also excellent far from the tourist centers with the rental car. Recommendations of the respective car rental companies for individual round trip routes help with the trip preparation.

In many Spanish vacation regions, such as the Canary Islands, rental cars are very cheap to have. Reason is the strong competition of the dealers. Thus, actually every vacationer can afford a rental car. For who wants to book the car over a longer period or requests certain specials such as a child seat, it is advisable to book the rental car beforehand via the Internet.

Car rentals and the rental conditions in Santa Cruz

The rental contracts usually provide for flat rates including unlimited mileage. After a change in the law, liability insurance with unlimited coverage also applies in Spain. An additional insurance by the so-called Mallorca policy is therefore largely superfluous. Most car rental companies for Spain require that the car driver is at least 21 years old and has held a driver's license for at least one year. In southern countries - so also in Spain - applies quite often the fuel regulation "full - empty". This means that the rental car is taken over with a full tank and can be returned with an empty tank.

For those who don't know, the Canary Islands are part of Spain, so they have the same traffic rules as mainland Spain. However, most traffic rules in Spain do not differ significantly from those in the EU countries. But some regulations are a bit different. Not to mention the discipline on Spanish roads, which leaves a lot to be desired. The situation is improving, however, since the police are taking stricter controls. Traffic offenders face stiff penalties.

Alcohol at the wheel of the rental car in Tenerife

Naturally, there is also on Tenerife for drivers as all passengers Belt obligation. All children smaller than 1,35 meters or younger than 12 years must travel in a special child seat and sit in the back if there is room. Cell phones must not be used while driving, unless afixed hands-free system is used to make calls. Dipped headlights during the day are not mandatory for cars. However, it is increasingly recommended by Spanish road authorities, especially on rural roads, on overcast days and in the darker season. Vacationers from EU countries can drive in Spain with their domestic driver's licenses without any problems.

Rent a car and park in Santa Cruz 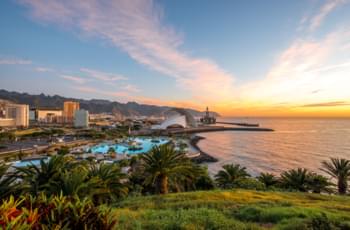 Parking is regulated by no parking and no stopping signs. In addition, there are sometimes yellow markings on the edge of the roadway, which also signal a parking ban. Blue lines mean you have to pay parking fees at a ticket machine. Green markings mean residents parking, but there can also often be parked at certain times with a paid parking ticket. Note that in the event of a violation parking claws are attached to the vehicle and in severe cases the vehicle is towed away!

Car Rental in the vicinity of Santa Cruz de Tenerife